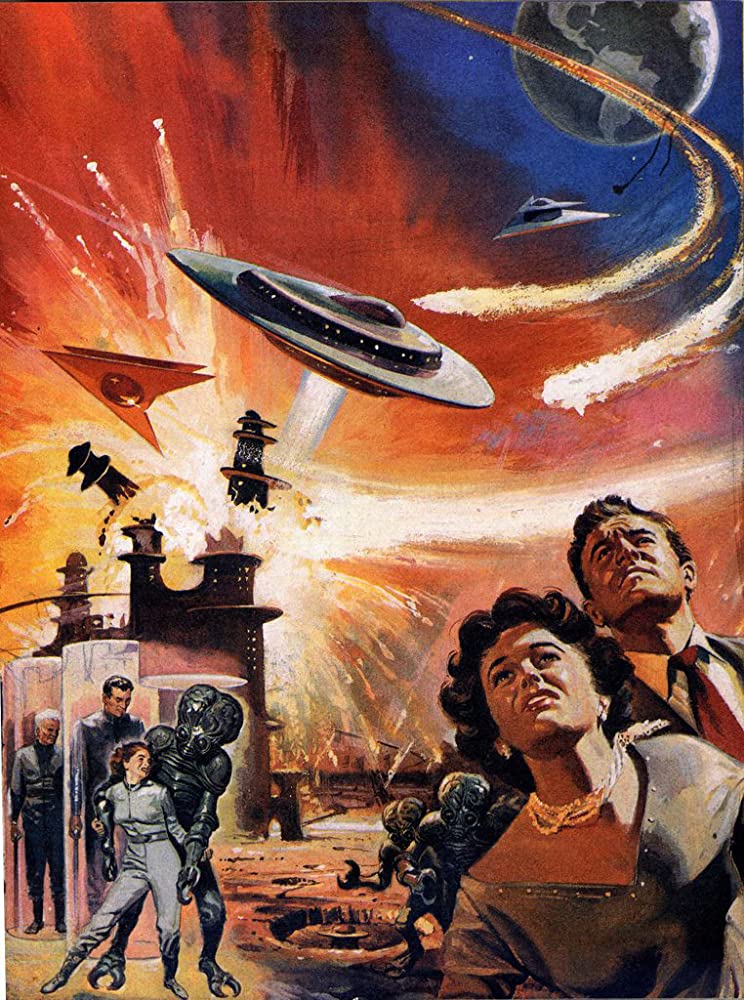 Our traditional Saturday pizza and bad movie night makes for a bright spot in this stay at home business.

Dr. Cal Meacham (Rex Reason) is an Air Force jet pilot and an electronics engineer working on a way to make atomic power more user friendly to Mr. and Mrs. Jones. On his way out to the lab in Los Angeles, he does a little hot-dogging, buzzing the control tower. It’s all fun and games until he realizes he no longer has control of his plane. He’s too low to bail out. Just when it looks like it’s curtains for Cal, a green light envelops the plane, takes the stick, and lands the craft safely.

Back at the lab, where Cal and his assistant, Joe Wilson (Robert Nichols), have been trying to transmute lead into uranium (heh-heh), the equipment keeps blowing out. Cal receives a parts catalog whose pages are made of some sort of metal. He orders an interociter, whatever that is. The crates fill the lab. He and Joe assemble the interociter, which looks like a vanity with a raised triangular view screen in the center.

Once the machine is completed and plugged in, the view screen resolves into the picture of a man with a high forehead, who introduces himself as Exeter (Jeff Morrow). He congratulates Cal on passing the test of being able to complete the interociter. He invites him to join an assembly of imminent scientists working for peace doing research like Cal’s. He tells him he’ll be sending a plane around for him and names the time and place.

Cal demurs. He’s got a good gig right where he is. Why should he leave it? Apparently, Exeter thinks this requires a show of force. Rays, later identified as “neutrino rays,” issue from the three corners of the triangular screen and incinerate the order catalog with its metal pages. Cal unplugs the interociter, which for some reason, causes it to self-destruct.

Nevertheless, he meets the plane, which lands in impossible fog. It lacks windows—and pilots.

We watched this with Svengooli as host. In general, his remarks are informative and interesting, but his jokes are… oh, boy. Nice to see him on the air again.

The plane takes Cal to Georgia, where he meets up with Dr. Ruth Adams (Faith Domergue). The two of them remember a past encounter at some science retreat in Vermont differently. He called her a sissy for not wanting to go swimming in a lake. Ah, what a romantic. She tells him he must be thinking of someone else. They also meet Dr. Steve Carlson (Russell Johnson, who would later go on a three-hour tour that would last a lifetime).

They meet in secret—a no-no—and come to realize the nuclear research for peace thingy is not all it’s cracked up to be. There are things they’re not being told.

The viewer knows that Exeter’s boss, the Monitor (Douglas Spencer), has decided to abandon the project on earth, a move that calls for more drastic action than pink slips. Before the good stuff hits the fan, our heroes have decided to part company (in a Woody! How cool!) with the nukes-for-peace crew. They should have taken poor Neutron, the cat who didn’t ask for any of this.

The mutant alien, the quintessential bug-eyes monster, with an overgrown skull and eyes to match, seemed to live longer on posters than in the movie. He menaced our heroes, but never got a chance to make his case. He was already severely wounded when he showed up. And his day goes from bad to worse. Granted, he was ugly. Granted, he had a bone to pick with Exeter. But, did his punishment deserve his crime?

While the special effects may not appear impressive on a small screen to an audience in 2020, in its day, with so many things going BOOM and the rays shooting all over the place, they were awe-inspiring. I also liked the idea of comets being weaponized against an enemy planet. Quite impossible and hardly worth the effort, but someone was thinking.

A lot of things happen in this movie. It was based on a 1952 novel of the same name by Raymond F. Jones, which was, in turn, a fix-up of three novelettes serialized between 1949 and 1950 in Thrilling Wonder Stories. The plot of the movie and the book diverge after the building of the interociter.

While there was a lot to enjoy in this movie, it simply took itself rather too seriously for my taste. And poor Neutron.