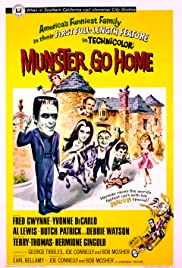 Coming home from work at the funeral parlor one day, Herman Munster (Fred Gwynne) finds the family waiting for him. It seems there’s a letter from some lawyer in England. The late lord Munster has just shuffled off this mortal coil, and left his entire estate, including the title to—yep—Herman.

After bidding goodbye to Spot, the dragon that lives under the front staircase (they’re not going to hire a Spot-sitter?), the Munsters head out across the pond from 1313 Mockingbird Lane: Lily (Yvonne De Carlo), Grandpa (Al Lewis), Eddie (Butch Patrick), and the “ugly” Marilyn (Debbie Watson). They take a cruise ship, not an airliner, which gives Herman and Grandpa amply opportunity to get into trouble.

Meanwhile, in Great Britain, the English side of the family feels rather put out by the arrival of the colonials. Ten seconds with this side of the family and the viewer doesn’t wonder why the old Lord Munster disinherited his children. Another complication arises when, as it turns out, the young man Marilyn met on the crossing comes from a family whose feud with the Munster family goes back decades. It can be settled only by a car race. Plus, there’s something the English Munsters don’t want anyone to know about—perhaps the content of the coffin-shaped boxes that keep coming out of the back door/dungeon of their estate?

There is not much in the movie one can take seriously. It’s just goofy. The humor is, well, sophomoric. Among the gags are a temper tantrum from a grown man, cousin Freddy Munster (Terry-Thomas), at not being named Lord Munster and applause from Lily and Herman when their Old Country relatives try to scare them away from Munster Manor. The scare tactics have more in common with the carnival than with any haunting, I might add. To top it off, Cousin Freddy walks up to Lily and Herman in a ghost costume that dishonors old sheets. At his first glimpse of the two, he heads for the hills by way of the wall.

In a couple of places, obvious stunt doubles are used, and some minor continuity issues crop up, but the viewer has to be looking for these. None make any difference to the story, such as it is.

Like the television show, it’s intended for kids. It was the first time audiences saw the Munster clan in color. This would have been fun at a drive-in back in the day (yes, I’m dating myself…), but it was also fun—if not exactly hysterical—for pizza and bad movie night with the dearly beloved during the days of staying home and social distancing.

We watched it via Svengoolie.